Reaching summit doesn’t seem feasible, but let’s see how far we can make it…

It’s a long weekend due to holi festival and pleasing wheather in mid of march is tempting to go for another trip to the mountains before summer arrives.

Me and my friend Rahul decided to go for Churdhar trek.

With the height of 12k feet, Churdhar is the highest peak in outer Himalayan range.

Churdhar trek is about 15km which can be divided into 3 parts of 5 kms.
1st part is quite steep and it is thorugh grassy and rocky terrain.
2nd part is of moderate gradients through dense Deodhar forest.
3rd part is again rocky and pretty steep.

As soon as the middle part of forest area ends. We get to see outstanding views.

Nohradhar is the base camp for Churdhar trek. It’s 5-6 hours drive from Chandigarh.
Road was in average condition. Traffic was much less then expectation. Beautiful views of the valley area makes it pleasant driving and I prefer taking many breaks along the way to see those views.

We left around 13:00 from Chandigarh. Our target was to reach Nohradhar by the evening, stay there for the night and then start our trek in the morning.

Rahul had been to Churdhar before and based on his experiences our plan was to reach summit by late afternoon and then stay there in one of cottages near the temple.

Upon interacting with the locals, we came to know that it’s pretty heavy snow up there, hence route is closed and we won’t be able to make it as there is no availability of food, water and shelter in the way.

We anyway decided to take the challenge and see how far we can make it.

This is the point from where our trek begins.

We woke up early around 6:30 and by 8:00 we finished breakfast, packed parathe for lunch and lot’s of chocolates, biscuits for energy. Soon we gained some elevation and sun was shining brightly. This was the only part where we had to walk in direct sunlight.

This is the first major stop where we find some plain area. Once the trek season starts, there is small cafe and a shared cabin available to stay overnight. But currently, it’s all deserted.

This is a delightful sight after some steep climb and walking on rocks in direct sunlight. April onwards there shouldn’t be any snow at this point called ‘Peli’.

Next part of this trek gives a completely different experience as the forest area starts so now we walk in shade instead of direct sunlight.

and occasionally there are some gaps in the dense forest. Thus, allowing us to embrace awesome views like this

Troubles due to snow and fear of leopard

There was thick layer of snow which was making it really difficult for us to walk because we don’t know how deep our next foot step might sink in.

Me and Rahul fell like this quite often. This was one such case where I thought of clicking photo first rather than helping him come out.

Also, there was foot steps along the way of some animal. Which looks like this

My guess is that it might be leopard. First impression is of a dog. But size of dog’s feet is even small. It can’t be a bear as that will have bigger feet. It’s some really big dog or something from the wild cat family, like leopard. Let me know your opinion in the comments.

We were tired and exhausted walking in such snow and frequent slips, but we didn’t give up and continued. Around 14:30 we reached the third major stop aka ‘Teesri’.

This is the place where we took lunch break. And suddenly it started to snow along with strong winds. Temperature also plummeted and any part of our body which is exposed to cold wind was freezing. Rahul removed gloves for a while and soon he started to feel numbness in his hands.

From here, it was difficult to find the way up and then coming back from there in dark was extremely risky. Also, walking in thick snow consumed lot of our energy and we did not have much water left. Usually there are few water sources around this area during summer season but there wasn’t any at that time. We decided to turn back even we did not wait for the storm to calm and started walking back. 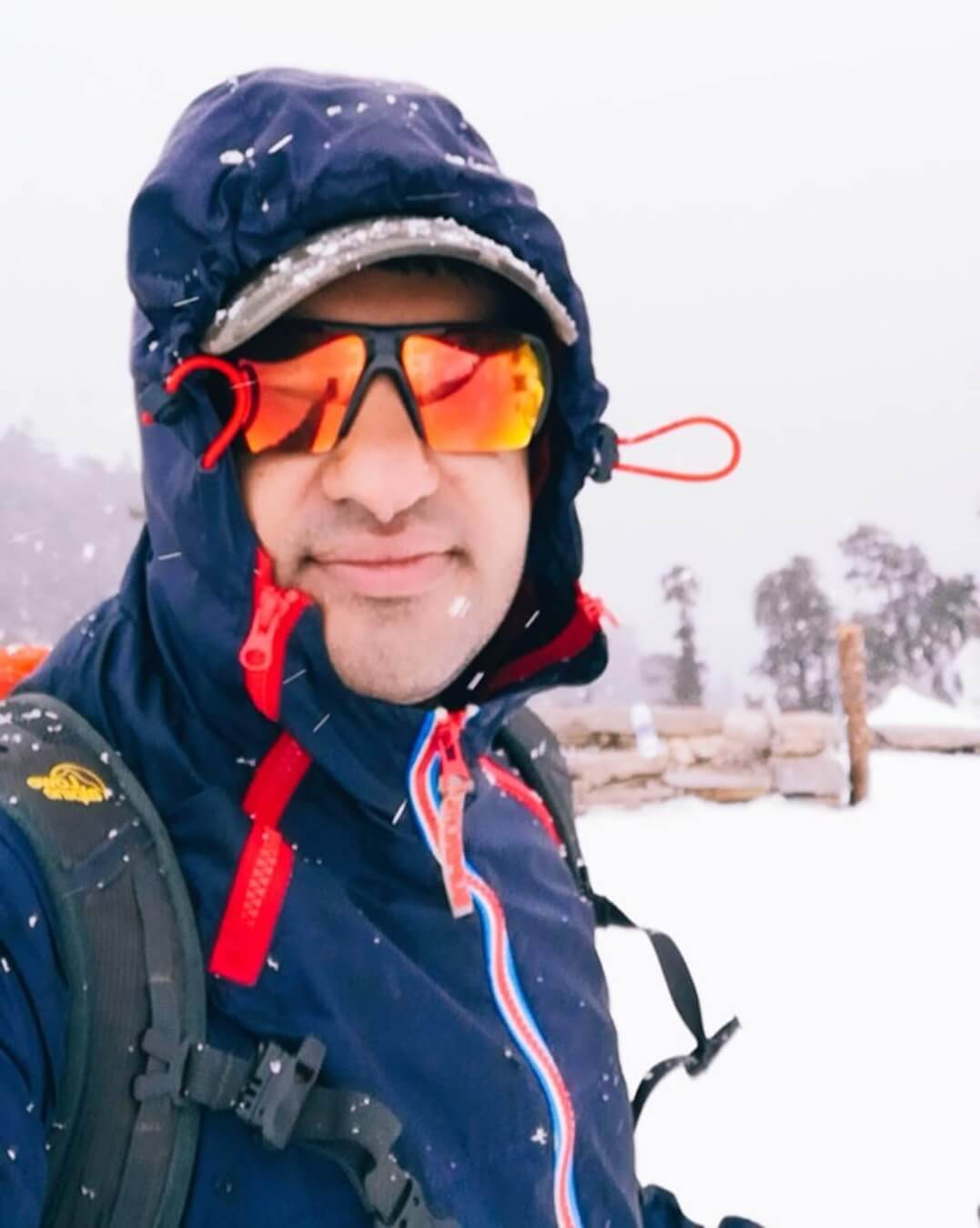 However, at this point the views all around were amazing. Such beautiful views all around due to wide open area without any tree or hills blocking your vision. I wish I could have stayed longer.

Descent from there was fast. Probably because of long break and energic lunch. Soon we were once again in the forest area. Our luck wasn’t the best as now Sun was shining again and that snow storm stopped. We took another break when we realized that now we are in comfortable position to make it down before it gets dark. So we took rest here

And, by this time my shoes and even lower part of pants was wet and muddy.

After, the satisfactory break we increased our speed and once we cleared snow and reached rocky terrain then we were almost running down hill.

It became dark and still a km or two was remaining so we were not much worried but exhausted from our endevour. Moon was about to rise and we found a beautiful place to stop by and see both the Sun setting down and Moon rising up. That was marvelous sight to see Moon rising behind the mountains.

After watching this phenomenon we climbed down the last bit which was a little steep and reached Nohradhar by 21:00 for night stay.

There is some regret in my heart that we couldn’t make it to the summit but I am satisfied with the thrilling experiences all along the way. During the complete trek route we just met 3 more guys who took sleeping bags and stayed at Peli (first major stop) the last night and were coming back in the morning. Hence, it was descent achievement to reach Teesari and come back to Nohradhar on the same day.

Let me know your comments and feedback.

Happy travelling and lots of love,